A Slippery Situation with Lube

by Shawna Scott February 03, 2016
Lube is one of those toiletries we kind of take for granted, but don’t really talk about. I worked in a chemist for several years before Sex Siopa and would often be asked about the differences and comparisons between nearly every type of product - toothpastes, deodorants, razors - even more personal items like tampons and pregnancy tests, but there was one product category that not one single person asked for a recommendation on, and that was lubricant.

It’s a rather odd stigma, because it’s not rooted in the fact that it’s a product for sex, but in the fear that there is something unusual about needing it in the first place. Despite the fact that the vast majority of people will need or want to use lube at some point in their lives - KY’s annual turnover for 2013 was over €100 million and they recently purchased Durex for an estimated €400 million - there’s a weird, unspoken assumption that arousal equals not needing lube. Like most social issues, this is largely due in part to a lack of media representation. Sex scenes in film and television have gotten significantly better about showing couples reaching for condoms on the bedside locker, but not the slippery stuff. Sure they’re so enthralled by their passion, they’re immediately good to go. If it is mentioned it’s usually the butt of a joke, like the scene in Superbad where Jonah Hill’s character berates Michael Cera’s character for having spermicidal lube on hand.

This is not to say that lube isn’t funny. It totally is. The word sounds funny; lube itself sounds funny when you squeeze it out of the bottle. It’s a product that is ripe for comedic picking, but not having balanced representation leads to embarrassment and stigma amongst consumers that can have unintended consequences.

In her book, Come as You Are, Dr. Emily Nagoski explores the science of sexual desire and the studies that have been done on the topic over the past 25 years. What she has noticed is that traditional masculine desire - described in the book as a sudden or random metaphorical lightning bolt to the genitals that let’s us know we want sex now - is seen as the default, universal sexuality. It is only recently that people have started to recognise that the female sexual arousal cycle is much more complex and is often based on response to pleasure. However because society views male desire as the default, it can cause many women to feel like there is something wrong with their bodies. This can also have an effect on the partners of women, who may feel that if their female partner isn’t immediately wet that she isn’t turned on or that if she isn’t immediately turn on, that they’ve failed as lovers.

This lack of understanding of female sexuality is mirrored in the absence of any detailed description in sexual education of how the vagina works:


“‘The vagina is designed to clean itself with natural secretions and should not require a ‘detox’....It contains good bacteria, which are there to protect it. If these bacteria are disturbed it can lead to infection, such as bacterial vaginosis or thrush, and inflammation.”


This quote is from Dr. Vanessa Mackay of the Royal College of Obstetricians and Gynaecologists, who was speaking in reponse to seeing a product called ‘Womb Detox Pearls’ from a company called Embrace Pangaea.

Earlier this month Gynecologist Jen Gunter wrote a blog post about the womb pearls and since Mackay. Many people including Dr. Gunter are concerned about the risk of Toxic Shock Syndrome that may be associated with the detox. In response Embrace Pangaea published a blog post in their FAQ section stating that:

“The recent propaganda claiming that our Herbal Womb Detox Pearls can lead to Toxic Shock Syndrome (TSS) is purely a unfounded and baseless attack on another holistic product without merit.”

Despite this, Embrace Pangaea seem to have since added several warnings on their site encouraging customers to speak with their doctors and do their own research about holistic treatments. But while womb detoxes may sound like a rather niche product to be worried about, personal lubricant isn’t. 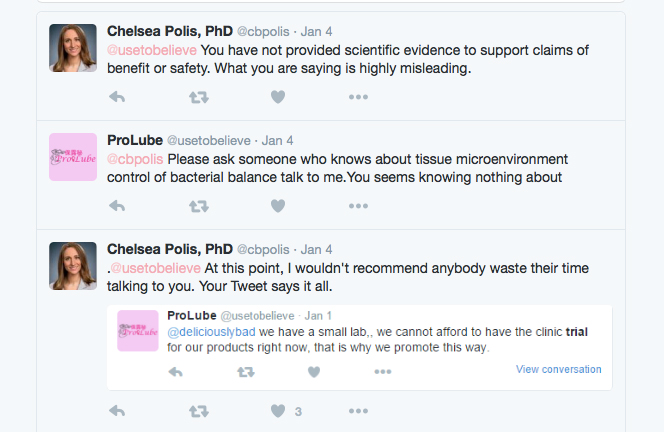 Just before the womb detox debacle kicked off, Dr. Gunter - along with Bioethicist and author, Alice Dreger; Epidemiologist Dr. Chelsea Polis; and several sex bloggers - was also involved in a lesser publicised, but equally important event that happened on Twitter. This group called out a company, Use To Believe, for claiming that its product, ProLube, could prevent HIV. While Use To Believe have since updated their website to say that ProLube should be used in addition to condoms to prevent HIV, there are still heaps of dubious medical claims on there. 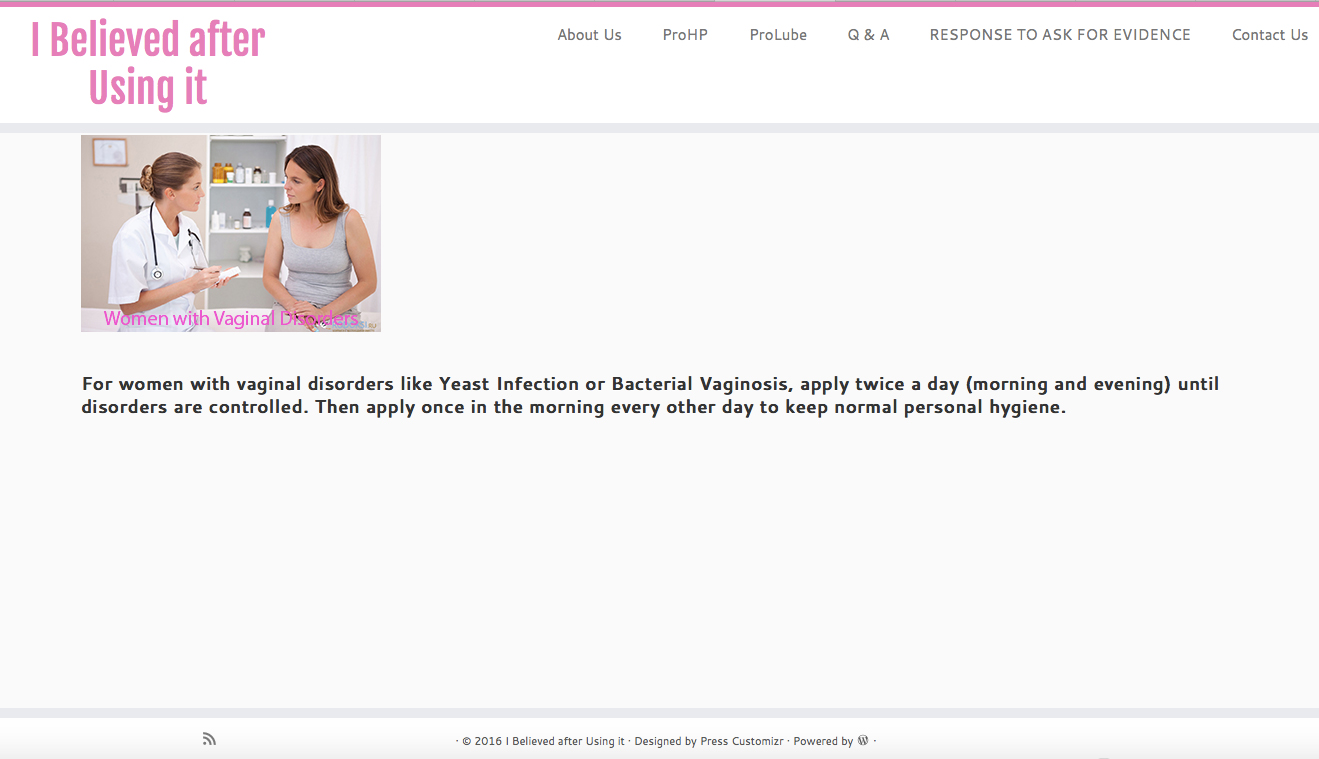 I reached out to Dr. Polis about what happened. She says “Dr. Alice Dreger alerted me and others on Twitter about the ProLube situation. I spoke with the company on Twitter, to see if they had evidence to support their claims, and to find out if they understood that their misleading advertising could endanger public health.”  After getting a far from satisfactory response from Use to Believe, Dr. Polis wrote a blog post urging people to file complaints with the Federal Trade Commission. Use to Believe soon changed their website to say that they do not sell to the United States.

So if not the US, then who is their target market?  “Given that ‘Use To Believe’ promotes ProLube online – and in English – it is unclear what geographic areas they are actually targeting in addition to Asia, where they do claim to be selling ProLube,” says Dr. Polis. “The website and several Tweets also indicate that the company targets sex workers in particular.”

But this shouldn’t deter people from using lubricants that are healthy and don’t make unsubstantiated health claims. It’s an excellent tool to have in your sexual utility belt, as Dr Polis makes clear:

“Lube can enhance sexual pleasure and can help to protect health by reducing friction, so it is great that many options available! However, people should be aware that certain substances can weaken the strength of certain types of condoms. For example, oil-based lubricants should not be used with latex condoms, as it will degrade the strength of the condom, making it more likely to break or slip. Given that this can increase the risk of unintended pregnancy or sexually transmitted infections, people should be informed about what products are safe to use together.”

What we should take away from these two cases is that it’s absolutely imperative that we talk more openly about sex and sexual health in the public sphere and to demand evidence from companies who make medical claims about their products. Remember if sounds too good to be true, it probably is. By asking questions, and holding companies accountable for their products, we can help contribute to the regulation of an industry that is too often ignored.